Driver of the Week: H Palmer

H Wayne Palmer resides in Roland, Ok with his wife Miranda and their twincesses Havyn and Hudsyn Palmer.

It all began in 1965 when the Palmer family decided to pursue the racing hobby, so when H was born he was immediately into the sport as well. At the age of 16, he became a 3rd generation driver for the Palmer family by following the footsteps of his grandfather Harry L. Palmer then his Uncle Jim Palmer, Father Tim Palmer and brother Ronnie Palmer. Out of all of the Palmer clan we can’t forget to mention a huge asset to the racing team who has always been the team’s Master Mechanic, Uncle Tom Palmer. He began racing at Crawford County Speedway where he called home at the time. Since then he has made Tri State Speedway his home track while racing occasionally at other locations such as Salina and Thunderbird Speedway.

With a very SPECIAL Thank You to the following:
First and foremost the good Lord above
Mom and Dad
Uncle Tom 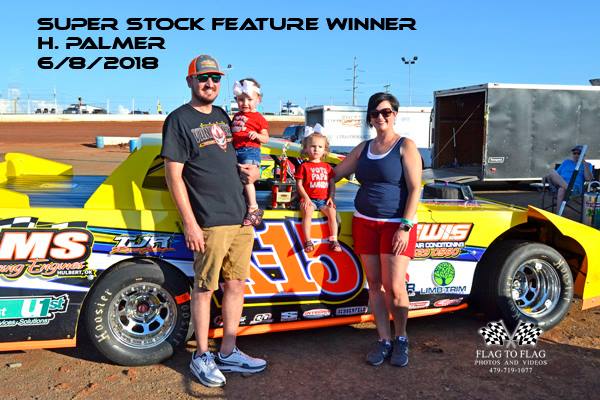